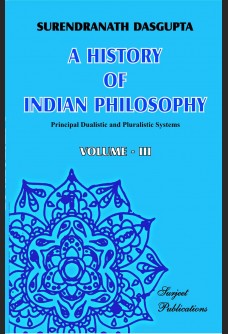 A HISTORY OF INDIAN PHILOSOPHY VOL-3

text_reviews  |  text_write
text_share
button_wishlist button_compare
text_qty
The work of Dr. Surendranath Dasgupta on A History of Indian Philosophy appears in five volume. Volume III of this book contains a fairly elaborate account of the principal dualistic and pluralistic systems, such as the philosophy of the Pañca-rātra, Bhāskara, Yāmuna, Rāmānuja and his followers, Madhva and his followers, the Bhāgavatapurāna and the Gaudiya school of Vaisnavism. In the traditional songs of the Arvārs and the later South Indian philosophical writers, beginning from Yāmuna and Rāmānuja we find a special emphasis on our emotional relation with God. This emotional relation of devotion or bhakti differentiated itself in many forms in the experience and the writing of various Vaisnava authors and saints. It is mainly to the study of these forms as associated with their philosophical perspectives that the present and the succeeding volumes have been devoted. Dr. Surendranath Dasgupta was born in Kushtia, Bengal (now in Bangladesh). He graduated with honours in Sanskrit, and later received his Master’s degree in Western Philosophy. He got a second Master’s degree from University of Calcutta. After this he got his doctorate in Indian Philosophy, following which he went to Europe to study European Philosophy. During this time, he was appointed a lectures at Cambridge, and represented Cambridge University at the International Congress of Philosophy in Paris. He later represented Calcutta University at International Congress at Naples and Harvard. He was also invited as visiting professor to Rome, Milan, Breslau, Konigsberg, Berlin, Bonn, Cologne, Zurich, Paris, Warsaw and England.