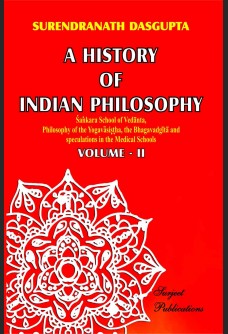 A HISTORY OF INDIAN PHILOSOPHY VOL-2

text_reviews  |  text_write
text_share
button_wishlist button_compare
text_qty
The work of Dr. Surendranath Dasgupta on A History of InZZdian Philosophy appears in five volumes. Volume II of this book contains four chapters on Sankara Vedanta, the Medical Speculations of the Ancient Hindus, and the philosophy of the Yoga-vasistha and the Bhagavad-gita. The author has also included a work on Indian philosophy of the speculations of the Indian medical schools. In ancient India, Biology had not grown into a separate science; whatever biological ideas were current in India were mixed up with medical, osteological and physiological speculations, the only branches of study in ancient India which may be regarded as constituting an experimental science. It was therefore thought that a comprehensive work on the history of Indian philosophy would be sadly defective without a chapter on these speculations, which introduce also some distinctly new ethical and eschatological concepts and a view of life which is wholly original. The biological notions of growth, development and heredity of these schools are no less interesting, and their relations to the logical categories of Nyaya are very, instructive. Dr. Surendranath Dasgupta was born in Kushtia, Bengal (now in Bangladesh). He graduated with honours in Sanskrit, and later received his Master’s degree in Western Philosophy. He got a second Master’s degree from University of Calcutta. After this he got his doctorate in Indian Philosophy, following which he went to Europe to study European Philosophy. During this time, he was appointed a lectures at Cambridge, and represented Cambridge University at the International Congress of Philosophy in Paris. He later represented Calcutta University at International Congress at Naples and Harvard. He was also invited as visiting professor to RoZme, Milan, Breslau, Konigsberg, Berlin, Bonn, Cologne, Zurich,