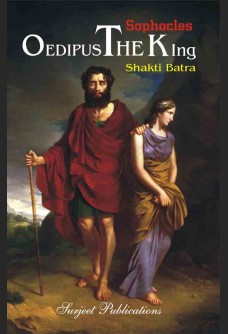 text_reviews  |  text_write
text_share
button_wishlist button_compare
text_qty
Most scholars are inclined to place Oedipus the King about 427 B.C., after the great plague at Athens, which is thought to have suggested the plague at Thebes in the play. Aeschylus had composed a Theban trilogy, of which an Oedipus (lost) was the second play, and we may assume that the largest outlines of the story were familiar to all. Or at least so much : that it was predicted that Oedipus would kill his father and marry his mother; that, unwittingly, he did both; and that these offenses were discovered and made public. In Oedipus the King, once the hero appears and announces his identity, the audience will know the great glaring facts about Oedipus and will realize almost at once that Oedipus does not know these facts. The situation makes for a story heavily charged with irony. The advance of the action consists of a probing into the past. Every ‘‘act’’ or episode brings in a new “helper’’–Oedipus himself, Creon, Teiresias, Jocasta, Messenger, Herdsman–each of whom contributes his clue, until the whole secret is out. A fresh dimension of irony lies in the fact that the ghastly tragedy is mounted on the frame of a happy romance–the lost baby miraculously saved, thought dead but restored and united with his parents. The search for the murderer of Laius and the identity of Oedipus come out at the same point. The discovery is the climax. Even among the plays of Sophocles, Oedipus the King stands out for its poetry, the sinewy, intense composition of the spoken passages, and the wild splendor of the choral odes. The play have been examined in context and analysed for the benefit of our university students. A number of critical and textual problems have also been answered from the point of view of examination. Shakti Batra has been Vice-principal, Dyal Singh College (University of Delhi), has also taught at the Kabul University and the University of Kyrgyzstan, Bishkek.