text_home text_separatorSILLY NOVELS BY LADY NOVELISTS: With An Introduction by SHAKTI BATRA 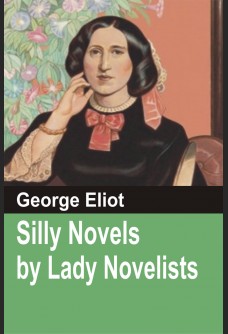 SILLY NOVELS BY LADY NOVELISTS: With An Introduction by SHAKTI BATRA

text_reviews  |  text_write
text_share
button_wishlist button_compare
text_qty
George Eliot wrote an essay entitled “Silly Novels by Lady Novelists,” wherein she criticized the popular female writers of her day. She argued that, as a whole, the work of “lady novelists” was too “frothy…prosy…pious…pedantic” and that their “perfectly well dressed and perfectly religious” heroines were usually too “good” to be true. Eliot wanted female writers to be more ambitious in their writing, to craft richer characters and more complex plots, to write as messily and freely as their male counterparts. Lady novelists have come a long way since Eliot’s time. Female writers have given us some of the most ambitious, interesting, and singular works of literature in history: Middlemarch, Beloved, Jane Eyre, To the Lighthouse, Ariel, The Talented Mr. Ripley, A Visit from the Goon Squad. The list is endless.