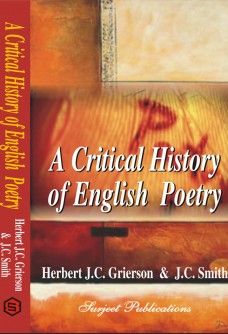 A CRITICAL HISTORY OF ENGLISH POETRY

text_reviews  |  text_write
text_share
button_wishlist button_compare
text_qty
ENGLISH Poetry may be regarded historically as one of the ways in which the national spirit has expressed itself in successive ages; or as the work of a succession of individual poets, each expressing his own mind and spirit; or as an art with various sub-species – epic, lyric, drama, etc. – each of which has developed in accordance with its own traditions. We shall try to do such justice as our space permits to all these aspects of the subject. Considering, however, that poems are made not by influences or traditions but by men, we shall lay most stress on the second. No doubt every poet is the child of his age and the heir of particular tradition; but the great poet helps to create the spirit of his age and to mould the tradition he has inherited. Therefore we shall dwell longest on the greatest poet, touching on the minors in so far as they supply important links in the chain of tradition or have themselves left something written which the world has refused to let die. Our plan may make this study less useful as a text-book, but it will help, we trust, to set the history of English Poetry in truer perspective. We have called this book A Critical History of English Poetry. But the critic, no less than the poet, is the child of his age; and we are well aware that critics like us, whose taste in poetry was formed in Victorian days, may fail to do justice to the poetry and the criticism of the present generation, between which and Victorian Age a “shift of sensibility” has occurred comparable to that which took place between the Age of Pope and the Age of Wordsworth.